Most alcoholic drinks contain ethanol and water as the main ingredients, but some sweet liqueurs have a higher sugar content than ethanol. The ethanol in alcoholic beverages is made through fermentation which is the process of bacteria or yeast reacting with the carbohydrates and sugars in food to produce alcohol.

Synthetic alcohol can also be produced from ethylene in cracked petroleum hydrocarbons, but the alcoholic drinks industry does not use this kind to make beverages. Synthetic ethanol has certain impurities that render it unfit for human consumption.

Some flavored alcoholic drinks have natural compounds and synthetic ingredients, and substances obtained from spices and herbs. The flavor of some vodkas, liqueurs, bitters, aperitifs, and vermouths is often constituted of various essential oils and their blends. Other ingredients included in flavored alcoholic drinks to enhance their flavors are synthetic coloring substances and products such as caramel.

Fermenting the sugars in grains, berries, and fruits produces ethanol. Other ingredients such as milk, honey, tubers, and plant saps can be taken through distillation to convert their original watery liquids into substances with strong alcohol content. Alcoholic drinks such as cider and wine are produced by fermenting fruits, while fermenting of cereals like rye and barley forms spirits and beers. The alcoholic content of any beverage is determined by how long it ferments. Spirits are produced through distillation, which separates water from alcohol to leave a potent alcoholic drink. Some alcoholic beverages like vodka, brandy, rum, gin, and whiskey have higher alcohol content due to distillation. Distilling fermented alcohol increases its potency by removing water from the original by-product.

Alcoholic beverages are categorized into distilled and undistilled or fermented alcohol. 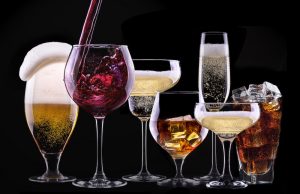 Undistilled or fermented alcohol is produced by fermenting plant matter or sugar using yeast or bacteria to make alcohol as a by-product.

Beer and wine are both made through fermentation. Undistilled alcohol is typically less pure and weaker in alcohol content.

The primary ingredients in beer include barley, yeast, hops, and water. The fermentation process for beer includes extracting sugar from the barley and fermenting it with the yeast to give beer as a by-product. Other grains used to produce beer include maize, rice, wheat, and rye. Other malt alcoholic beverages formed through fermentation like beer include malt liquor, porter, stout, and ale. Beers usually have an alcohol content of two to eight percent.

The primary ingredient in wine is mainly the juice from grapes or other fruits like plums, berries, cherries, or apples (which make cider). Winemaking starts by harvesting the fruits, then getting the juice and fermenting it under meticulous temperatures. After fermenting the mixture, it is then refined, matured, and bottled. Unfortified or natural grape wines usually have an alcohol content of eight to 14 percent. Fortified wines have an alcohol content of 18 to 21 percent as they typically have brandy or alcohol added to them.

Hard ciders are made by fermenting fresh apple juice or pear juice into an alcoholic beverage. Soft cider or non-alcoholic cider is raw, unfiltered apple juice. 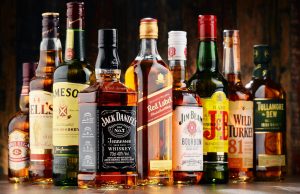 Distilled alcohol is produced by heating fermented plant matter such as the mashes of fruits and grains to vaporize the flavorings and alcohol content into steam, cooled, and condensed into a liquid. The remaining water is disposed of accordingly.

The accumulated concentrated liquid is the distilled alcohol and comprises liquors like cordials, liqueurs, brandy, rum, vodka, gin, and whiskey, as mentioned before. Distilled alcoholic drinks have an alcohol content ranging from 40 to 50 percent, but you can find some beverages with a higher or lower concentration.

Whiskey is produced by distilling a fermented grain mash. Grain starches used include corn, wheat, barley, or rye, which are converted into sugars and combined with water and yeast then fermented. The mixture is then distilled under high temperatures and aged frequently in charred white oak wood casks or barrels to obtain a unique flavor. The whiskey is then bottled directly from the casks, after which it ceases to mature. Whiskey has an alcohol content of 40 to 50 percent or even higher.

Gin is produced by distilling the fermented malt of rye and barley. It is often distilled several times, and the flavors are obtained from juniper berries. Other ingredients used in making gin include almond, citrus peel, coriander, and cinnamon.

Vodka is a distilled Russian alcoholic drink made using the fermented mash of potatoes. It is also matured for extended durations in wooden casks. Vodka can also be produced from cereal grains, sugar, milk, and fruits like juniper berries.

Rum is produced by distilling fermented sugarcane by-products like sugarcane molasses, juice, or syrup. It is matured in white oak casks to give it a characteristic color, aroma, and flavor. Rum has an alcohol content of 40 to 75.5 percent.

Brandy is made by distilling wine, which is fermented grape juice. Brandy is aged by storing it in wooden barrels. It has an alcohol content of 35 to 60 percent.

Tequila is made by distilling the blue agave plant, which is the main ingredient. Agave has a high natural sugar content meaning there is no extra sugar included in the distillation process.

Absinthe is distilled from fermented leaves and herbs, and it usually has a higher alcohol content of 90 percent.

Liqueurs are unique liquors that are sweetened using several extracts, oils, and flavors.

Grain alcohol or ethanol is a neutral spirit made by twice distilling fermented grains, including rye, rice, corn, or wheat. 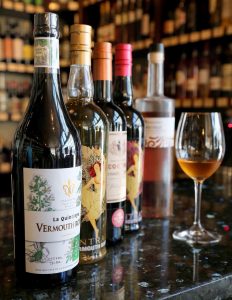 Vermouth is an aromatized wine whose flavor is enhanced by infusing it with components like herbs, flowers, seeds, spices, barks, and roots. Brandy is also added to help fortify it or make it stronger. Vermouth is categorized as either dry or sweet.

There are various ingredients used in different alcoholic drinks, but alcohol is the main ingredient in all of them. The alcohol component has an intoxicating effect, and if not taken in moderation, it can be fatal depending on how much you drink. It is always advisable to contact 911 or a poison control center if someone takes an alcohol-based substance, especially one that is not meant for consumption.